Right Whales Critically Endangered: What Can We Do? 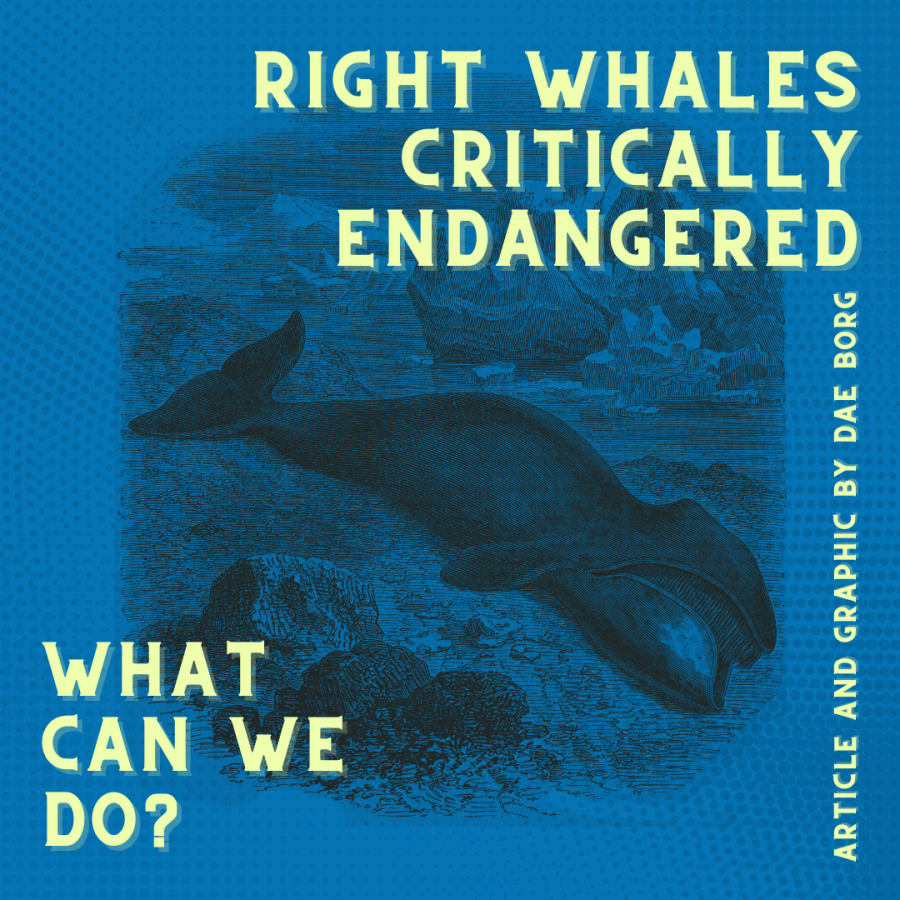 Today, we are closer than ever to the extinction of the North Atlantic Right whale and we continue to draw nearer with every year that passes. They are one of the most endangered Baleen whales in the Atlantic Ocean, with less than 400 known individuals remaining. Each individual can be identified by their callosities, which are unique skin growths, similar to warts on humans. These distinct markings are how we have been able to accurately count the number of remaining whales. Much of the initial Right whale population decrease was due to the 1890s  whaling industry. In the whaling industry, whales were hunted and killed to produce oil from their blubber(1) and other materials from their baleen(2).

The whaling industry is no longer a threat, but human interactions continue to play the largest role in the deaths of the North Atlantic Right whale. Dr. Ann Pabst, a professor in the Department of Biology and Marine Biology at UNCW adds, “They don’t die due to natural causes, at least as adults. They die because our actions unintentionally kill them.” Two human induced mortalities in particular that affect the North Atlantic Right whale population are vessel strikes(3) and their entanglement in fishing gear and plastic. Beginning with vessel strikes, North Atlantic Right whales are put in an extreme state of vulnerability due to their migration routes frequently overlapping with those of ships and their habitats are often close to major ports that put them at a higher risk for collision. Many of these strikes that lead to major injury and/or death also go unnoticed by vessel operators or unreported by researchers because marine animals are not always clearly visible from the surface. It is hard to estimate how many North Atlantic Right whales have experienced death or injury due to vessel strikes because of this.

Another important human induced mortality affecting the whales is entanglement in fishing gear. Fishing gear can severely injure whales, cutting deep into their skin, sometimes even down to bone. This can also lead to life threatening infections. Oceana(4) describes entanglement as “a slow and painful death.” According to Dr. Sarah Sharp, an IFAW(5) veterinarian, “entanglement deaths increased from 21% to 51% from studies dating back to 1970.” Additionally, Right whales are driven to Southern waters to give birth and nurse their young and as they migrate to these new locations, more Right whales will be at risk for entanglement. This is mainly because not everyone is aware of their migratory patterns, and this results in commercial fishing nets potentially getting in the way.

Today, the population of the North Atlantic Right whale is at an all time low; moreover, the population of females is decreasing much more quickly than that of males. Several experts warn that if action is not taken, the Right whales will go extinct within years. Pushing back on the number of entanglements is difficult due to the lack of technology and funds put towards conservation efforts to do so. Many organizations such as NOAA (National Oceanic and Atmospheric Administration), Oceana, and WWF (World Wildlife Fund) are working towards reversing the effects of human induced mortalities on the whales and are hoping to gain as much support as they can to save this marine mammal from extinction.

How can we as students help?

Report all marine life strandings(6) to the NOAA Fisheries Southeast Marine Mammal Stranding Hotline at (877) WHALE-HELP (877-942-5343)
Report all Right whale sightings from North Carolina to Florida at (877) WHALE-HELP (877-942-5343) or from Virginia to Maine at (866)755-6622
Continue to educate yourselves and others on the impacts humans have on marine life and get involved with organizations that help with marine life conservation
Join the Marine Conservation Club to learn more about how students at Enloe can get involved with efforts to help preserve the ocean and all the creatures living in it. To join, text @enloemari to 81010 or email [email protected]

Fat of sea animals
Plates made from the same material as our fingernails that hang from the inside of the whale’s mouth and are used to filter-feed, often mistaken for teeth
Collision between any marine animal and boat in the ocean
A nonprofit organization that focuses on the preservation of Earth’s oceans and the organisms living within them
International fund for animal welfare